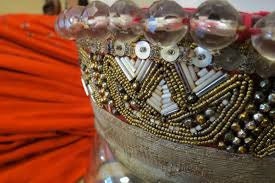 The dress of Kurzeme reflects not only the traditions of Latvians and  Livs (the indigenous people) but also of closest neighbors –  Lithuanians, Estonians and Poles.

It  was the second part of 19th century when the dress of Kurzeme witnessed  radical changes. Namely, the bright chemical dye clours came to be. It  began with bright stripes appearing in the north and east of Kurzeme and  colourful red in the southwest. A characteristic feature for the bright  monochrome skirts was the ornamented lower edge, sometimes made form a  band of a different colour. In the same way a widespread tradition in  some parts of Kurzeme was for both men and women to wear bronze belts,  while in the seaside districts, people adorned their clothes with small  amber brooches and strings of beads made from pieces of amber. More than  in other regions, the garments of Kurzeme contains  industrially-produced textiles and clothing accessories like silk,  velvet, brocade also glass and metal.